WASHINGTON, D.C. — Georgia Institute of Technology researcher Annabelle Singer has been named a recipient of the prestigious Jannett Rosenberg Trubatch Career Development Award from the Society for Neuroscience (SfN). It is one of four awards that SfN gives to leading researchers who have made significant contributions to the advancement of women in neuroscience.

“SfN is honored to recognize this stellar group of neuroscientists for both their groundbreaking research and their leadership in advancing women in neuroscience,” said SfN President Barry Everitt. “These women are dedicated to both innovative, creative approaches to scientific questions and mentoring, advocating, and being role models for young female and minority scientists. They have all already made significant contributions to their fields, developing new tools for research or therapeutic approaches.”

The Trubatch Award recognizes early-career researchers who have demonstrated great originality and creativity in their work. Singer, an assistant professor in the Wallace H. Coulter Department of Biomedical Engineering at Georgia Tech and Emory University, and a member of the Petit Institute for Bioengineering and Bioscience at Georgia Tech, was called out for her unique research in addressing Alzheimer’s disease.

Singer’s groundbreaking insights into the interaction between neural activity and immune function is providing a possible new therapeutic approach, utilizing flickering auditory and visual stimulation at specific frequencies to affect not only sensory areas but memory circuits, too. These oscillations trigger biochemical signals that mobilize the brain’s immune cells to help clean up molecular hallmarks of Alzheimer’s disease, like amyloid and hyperphosphorylated tau. Repeated stimulation also improved memory in mouse models.

Because of the non-invasive nature of the procedure, it is considered a promising candidate for treatment (Singer recently presented the results of a preliminary clinical trial in humans).

Also receiving a Trubatch Award was Markita Landry (assistant professor of chemical and biochemical engineering at the University of California-Berkeley), who developed probes that can measure chemical communication between neurons. Winners of the Trubatch Award receive a $2,000 prize.

The Society for Neuroscience is an organization of nearly 36,000 basic scientists and clinicians who study the brain and the nervous system. 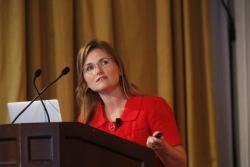